Statement on the disaster in Chamoli District, Uttarakhand, northern India, on 7 February 2021

A devastating debris flow occurred on Sunday 7 February in Chamoli District, Uttarakhand, northern India (see Fig. 1) resulting in 26 deaths reported so far with about 171 people missing including 35 construction workers trapped in a tunnel at the Rishi Ganga hydro plant at the time of writing.  It appears to have originated as a major snow, ice, and rock avalanche and had nothing to do with a glacier or glacial lake outburst flood (as indicated in many press reports). The source area, which has been identified as being located around 3.25 km to the north of Nanda Ghunti peak (el. 6309 m), has a history of significant rock/ice avalanches and landslides. 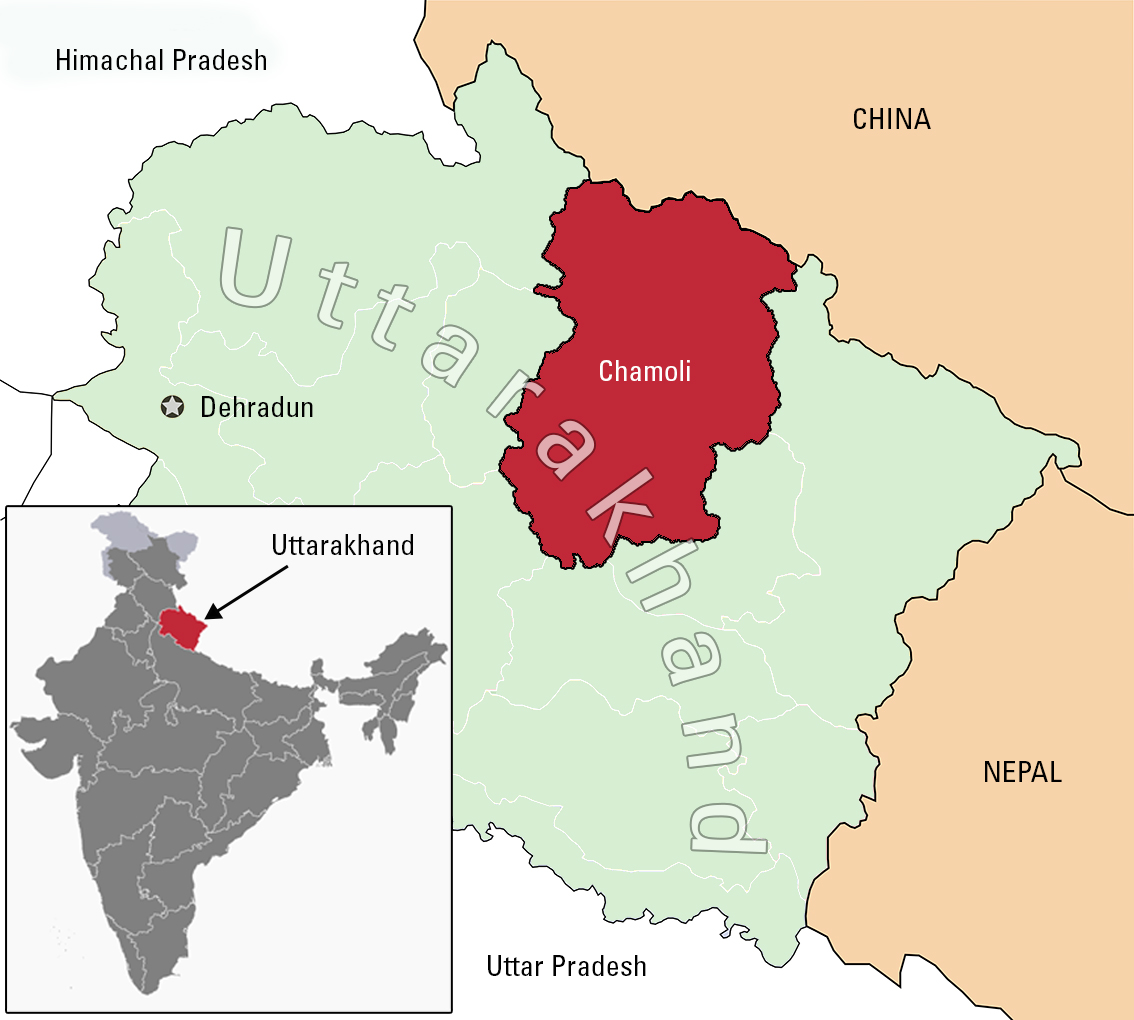 Fig. 1.  Location of Uttarakhand in India, and the Chamoli district of the state, where the disaster occurred.

From Planet Labs satellite imagery acquired the day before and day after the event (provided by Dr Dan Shugar on the AGU Landslide Blog on 8 February 2021, Fig. 2) it is clear where the source of the event was. I have annotated the top of the source area (red line) on both images and indicated on the one acquired on the day of the disaster where the source area is thought to have been (red polygon). The postulated source area, as seen on a Google Earth image dated 7 October 2017, is shown in Fig. 3 in more detail, with key features annotated. It had an area of ~200 000 m² and was probably tens of metres thick.  It would appear from initial inspection of this satellite image that the top of the source area is at el. 5600 m. The snow, ice, and rock mass fell to 3800 m down the steep mountain flank, pulverising on impact. The major landslide/rock avalanche also produced a huge and widespread dust cloud along the valley, seen in some videos of the event and captured on the Planet Labs satellite images.

Fig. 2. Planet Labs satellite imagery acquired on the 6 (before) and 7 February (after) the disaster (provided by Dr Dan Shugar via Twitter).  The red line indicates the approximate crest of the general source area. The specific area interpreted to have been the source of the avalanche is shown by the red infilled polygon. 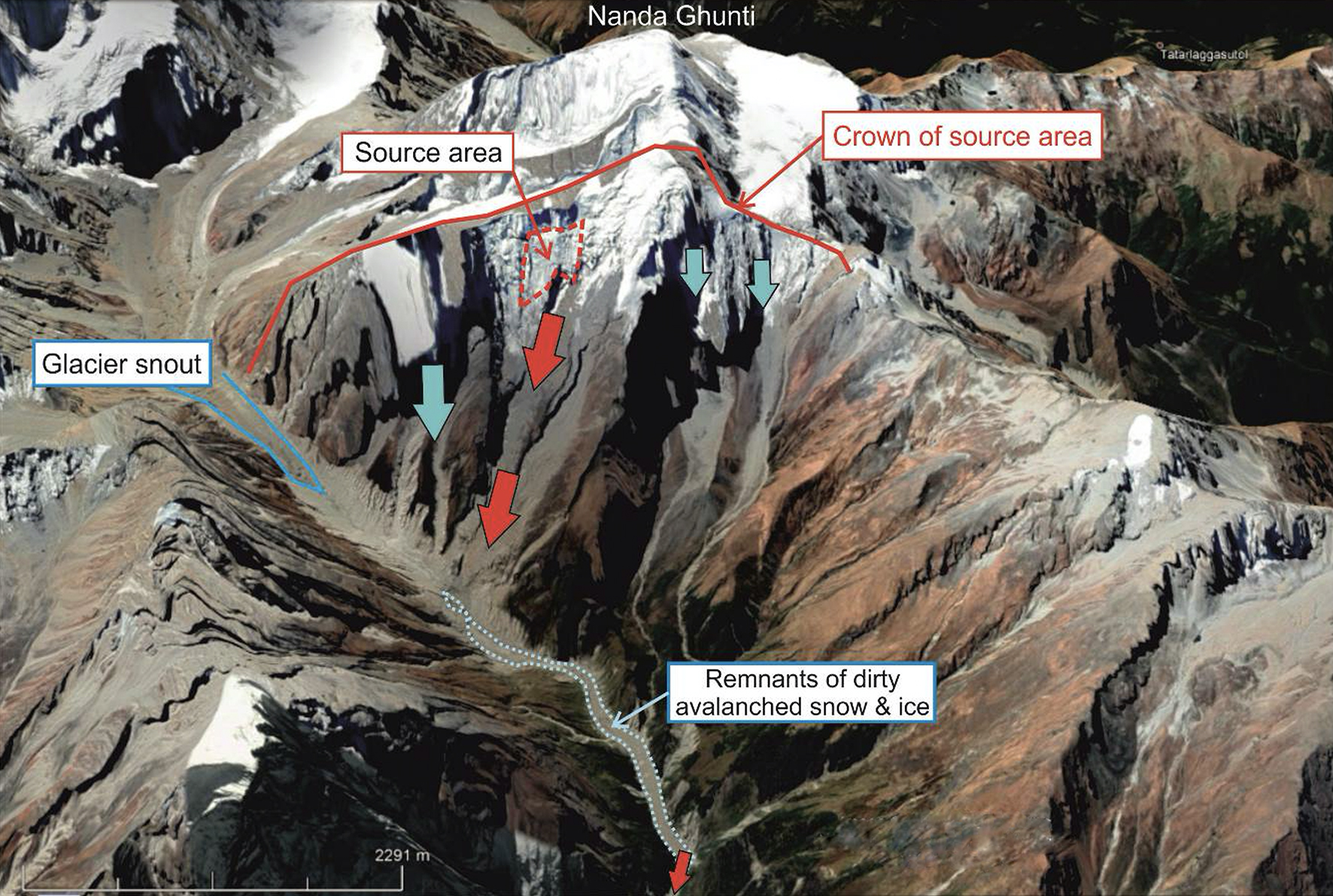 It is thought at this preliminary stage that the landslide/rock avalanche collapsed onto the floor of the valley about 1.5 km downstream from the adjacent glacier snout (light blue outline). From analysis of time series satellite imagery, it is thought that there were several previous large snow and ice avalanches in the period between 2014 and 2016. There was one notable significant snow and ice avalanche between the 19 and 24 September 2016 that ran-out along a ~3.4 km stretch of the river valley, leaving an area of about 300 000 m² of variably thick remnant compressed snow and ice, and (as seen on 2017 imagery) which is depicted by the light blue dotted area, part of which is shown in detail in Fig. 4. These details represent a consensus view of international colleagues associated with GAPHAZ[1]. It is not known whether much of this remnant ice was there at the time of the latest landslide, or if even more had accumulated from more recent snow and ice avalanches. It can be seen on Fig. 3 that the river has melted a tunnel underneath this residual avalanche material. Where the tunnel roof has collapsed, windows through reveal the river flowing below. This latest major rockslide has fallen onto this avalanche remnant ice area, probably melted it from the frictional heat associated with the pulverised landslide fragments, contributing of the order of 1 million m³ of water on top of the existing river flow. Coupled with the large volume of debris from the landslide itself (possibly of the order of 10 x 106 m³), the combined mass was able to travel with considerable speed down valley, wreaking the scale of devastation that was captured so dramatically by video in several locations downstream. Figures and specific details quoted here are very approximate and undoubtedly will be revised once more imagery becomes available.

There is an important lesson to be learned by the hydropower sector here. Identification of past physical processes in the catchments upstream of a hydropower scheme can be identified by undertaking a comprehensive Integrated Geohazard Assessment. This helps to inform what appropriate measures can be implemented to increase the resilience to more extreme natural processes, such that prospective impacts can be reduced. It is a question for the Indian hydropower sector and authorities as to whether such assessments were and are a condition of obtaining a development licence or not, and whether any were undertaken, and the project Risk Registers (if any) updated accordingly. Also, was expert advice followed? There are news reports of the Uttarakhand Government overriding the advice of local experts. If such hazard assessments are not undertaken or ignored, permitting development without appreciating the physical risks to life, structures, and consequential financial implications, will lead to yet more such lethal disasters.

Fig. 4: An extract from Google Earth imagery acquired on 7 October 2017, showing the interpreted remnant dirty avalanched ice (outlined by the blue dotted line) along part of the Rishi Ganga Valley floor. The river flow direction is indicated by the blue arrows.

There will always be a dilemma of hydropower development in glacierized high mountain environments. The altitudinal ranges available and steep fast flowing rivers are ideal for hydropower. However, the reasons for the mountains existing is that these are extremely active and dynamic environments. The hydropower profession has a significant challenge in resolving this dilemma, but it can be done. Tragically, however, hydropower developments in the Himalayan region have a chequered history with far too many large fatal catastrophic events. This latest event is a stark reminder of the costs of failing to take these issues seriously. This is a warning not only for the hydropower sector in the Himalayas, but is a broader message for many more, and must not be ignored! – Prof. John M. Reynolds, 11 February 2021.