The new concession was signed on 23 September by the Governments of the two cantons of Solothurn and Aargau as well as representatives of Alpiq, the concession holder, and took effect retroactively from 1 January 2020.

Alpiq said it had sought an early renewal of the existing concession, which was valid until 2027, as the associated Winznau weir requires comprehensive refurbishment. The power utility said that it will invest a total of more than CHF 63 million (US$ 68 million) in the facilities, thus making an important contribution to climate-friendly electricity generation and security of supply in Switzerland. This comprises more than CHF 50 million in the renovation of the Winznau dam including the strengthening of the side dams and a new eco-flow unit for the higher residual water discharge and around CHF 12 million for the implementation of a total of 21 measures designed to improve significantly the environmental footprint of the Gösgen hydropower plant in line with the Federal Act on the Protection of Nature and Cultural Heritage. Fish migration, for example, will be improved thanks to increased water discharge into the revitalized old Aare, a new fish bypass at the powerhouse in Niedergösgen and the removal of the Bally weir. “Hydroelectric power plays a central role in ensuring our security of supply with electricity,” said Stephan Attiger, a Government councillor of Aargau. “This requires substantial, long-term investments. The Canton of Aargau thanks Alpiq for its entrepreneurial decision to maintain hydropower,” Stephan Attiger said. 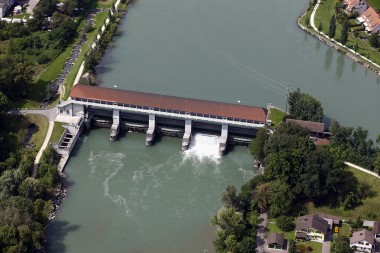 The Gösgen plant is the largest run-of-river power station on the river Aare. Commissioned in 1917, it was completely rebuilt between 1997 and 2000 and now generates 12 per cent more electricity with the same flow of water. The powerplant is equipped with five Kaplan turbines (one of which supplies 16.7 Hz traction power for the SBB Swiss Federal Railways), and which generates average annual output of 300 GWh, which corresponds to the annual consumption of some 75 000 households. The powerplant utilizes the gradient of the river Aare over a stretch of around 14.5 km, from the Aare Bridge near the town of Aarburg to the village of Schönenwerd, of which 93 per cent runs through the canton of Solothurn and seven per cent through the canton of Aargau.

The contracted works are scheduled to start in March 2021 for completion by the end of 2023.

Bids are invited by 30 October for the modernisation of the 544 MW plant.