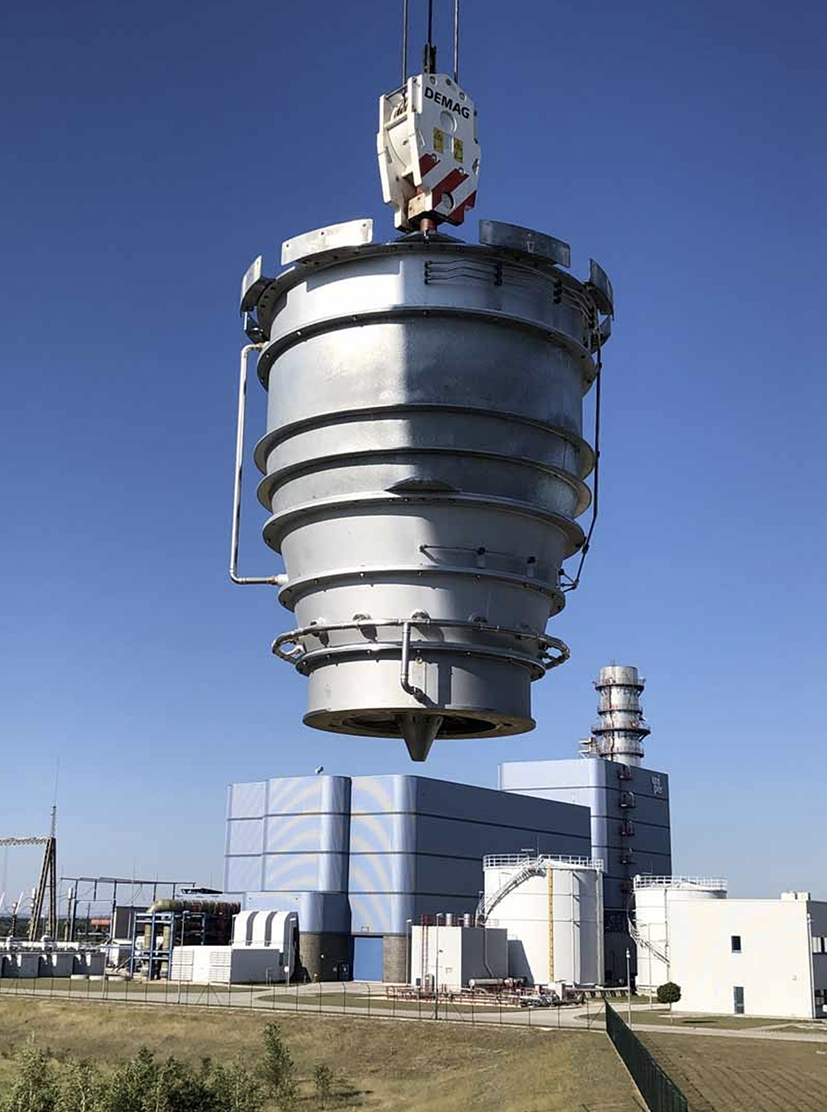 The technology is designed to be robust and has a patented wear and tear free sealing system. All mechanical components are engineered and manufactured at the DIVE-factory in Germany.  In combination with a maintenance free generator and bearing system is it possible to operate DIVE-Turbines at runaway speeds undamaged and for infinite periods. This gives increased security to operators of the existing 450 MW gas scheme. In case of a grid failure or other electrical problems, the guide vanes of the turbine open automatically and guarantee the maximum discharge for the cooling system.

The turbines are installed in the existing outflow structure inside a 2. 50 m diameter concrete pipe. Changes to the civil works, installation, and commissioning of the turbine system were undertaken during the annual power plant inspection. The installation team of DIVE Turbinen GmbH & Co. KG had to finish the whole on-site within three weeks, from the stop to the restart of the cooling system. Thanks to their newly developed ‘plug and play’ solution, it was possible to finish the civil works, the installation, cabling and piping of two units as planned. Unfortunately, due to a leaking stoplog on one of the chambers, one turbine could not be put into operation on time and was instead finished very recently during the next planned outage of the gas power plant.

The ‘plug and play’ solution, makes it possible to lift the complete turbine-generator-unit, under full flow condition, out of the turbine chamber. It is also possible to remove or insert the unit without any negative impact on the cooling system.

The new in-pipe turbine is specifically developed for pipe installations or replacement of existing pipe turbines, such as Flygt turbines. DIVE Turbinen GmbH & Co. KG holds several patents, one of which concerns the wear and tear free sealing system which plays an important role for the completely submerged turbines. The turbine and generator are directly connected and installed as one unit which is completely assembled and tested at the factory. Therefore, the on-site risks during commissioning and with interfaces are mitigated.

Starting from low head technology in 2006, the turbine manufacturer worked its way in the last years towards medium head turbines up to 120 m of head. The medium head turbines, also installed in Hungary, are based on the hydraulic principle of the Deriaz turbine and a permanent magnet generator. With this design, it is possible to reach high efficiencies at a wide range of discharge and especially with variable hydraulic head potentials.

Hidroelectrica, Romania’s state-controlled hydropower producer seeks bids by 24 May for the refurbishment of the 335 MW Râul Mare Retezat storage plant on the Râul Mare, a left tributary of the river Strei, in the southeastern county of Hunedoara. Commissioned in 1986, the high head plant is equipped with two vertical Francis units, which generate annual output of 605 GWh.

CEZ, the Czech Republic’s state-controlled power utility, invites bids by 31 May for the refurbishment of all four 91 MW units of the 364 MW Orlik hydropower plant on the Vltava river. The tender calls for the complete design, supply, disassembly and assembly of the turbine and generator parts of the TG1-TG4 units, including auxiliary equipment, technological equipment at the inlet and outlet, supply of all electrical parts, I&C and electrical protection, including testing and re-commissioning. The modernization of the plant, which is expected to increase efficiency by around 4 per cent, is scheduled to take place in stages between January 2023 and April 2030.