Namibia’s largest dam, the Neckartal multipurpose dam, has been officially handed over to the Government by the contractor, Italy’s civil engineering and construction group Salini Impregilo.

At an inauguration ceremony held on 14 March, Namibia’s Vice-Presi­dent, Nangolo Mbumba, said in his keynote speech that the dam would have multiple benefits for the people of the southern African country. “The essence of this dam ought to be seen in the bigger scheme of things: that of enabling and being a catalyst for water security, food security, sport and recreation, energy generation, research and development, industrialization and job creation,” he said. “The dam will contribute immensely to much needed direct job creation and positively stimulate economic growth in Keetmanshoop and its surrounding areas, as well as contributing to water security, food self-sufficiency, and food and nutrition security for the Karas region in particular and Namibia in general,” he added.

Salini Impregilo, on 17 March, added: “It is the symbol of a Namibia that wishes to move forward after the difficulties of the severe drought in the past year, by implementing environmentally sustainable works aimed at guaranteeing a secure water supply and the country’s food independence”.

The 78.5 m-high curved gravity RCC dam, with a crest length of 518 m, was completed in October 2018 by the Italian construction group, at a total cost of N$ 5.5 billion (US$ 2.95 billion). The dam, which is 40 km west of Keet­manshoop, in the Karas re­gion, is designed to store the floodwater of the Fish river during the rainy season. It will impound a reservoir with a maximum storage volume of 857 x 106 m3 of water, spanning an area of 39 km2. It is expected to take at least two years to reach its full capacity, according to calculations based on an estimated average annual runoff of 500 x 106 m3 of water.

As a result of the scarce rainfall in the region of Karas, the river only flows between January and May. At present the reservoir is only 10.5 per cent full. The dam will be handed over to NamWater once water levels have reached 45 m, according to the Exe­cutive Director in the Ministry of Agriculture, Water and Forestry, Percy Misika, and after the mechanical and electrical testing of facilities has been completed.

The infrastructure is part of the first phase of the Neckartal Irrig­ation Scheme (NIS), which aims to support the development of the area by irrigating 5000 ha of land for cultivation of cash crops such as alfalfa, grapes and dates, as well as fruit and vegetables, generating employment for hundreds of local people, as well as revenue and other spin-offs that could be worth hundreds of millions of Namibian dollars.

Agriculture, with forestry and fishing, is the main industry in Karas, employing 32 per cent of the working population. When the irrigation of the nearby areas has reached its peak potential, an additional 4000 jobs will have been created directly and indirectly. Besides contributing to producing food for the region’s farming, the new dam will also have a positive impact on tourism and the economy in Kee­tmanshoop and surrounding areas.

As part of the project, a 2.95 MW hydropower plant and pumping station, along with an associated intake structure and weir, will be built downstream from the dam for the irrigation system. The plant will be equipped with two 1475 kW Francis turbines and will generate power for the national grid.

The Governor of the Karas region, Lucia Basson, welcomed the project but asked the Government to speed up work to finalize the planned irrigation scheme. “This project with the construction of the dam had a huge impact on the people of the Karas region. The expectations of the people are now very high. The water should not just be stored in the dam, it must be used for the irrigation project,” she said.

Basson also commended the construction of the dam, saying it would benefit the arid region. “I have been defending this project against critics who charged that it was senseless to construct the dam, the largest in the country, in a region as arid as Karas. For decades, water that was just passing by and causing a lot of damage or just got wasted can now be put to good use,” she added. 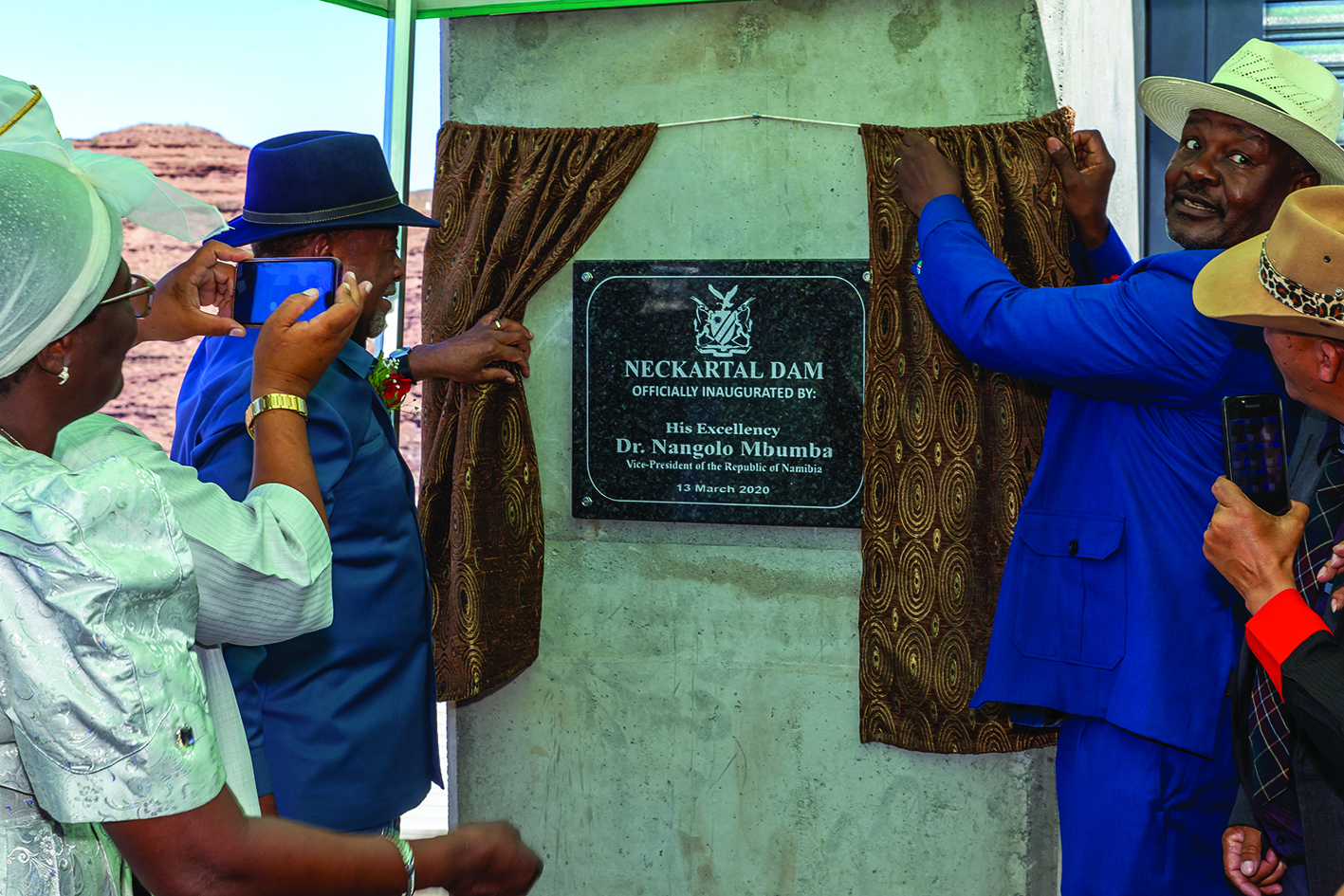 A plaque to commemorate the inauguration is unveiled by Namibia’s Vice President, Nangolo Mbumba.

On 1 May, a breach occurred at the recently completed Sardoba dam in Uzbekistan. Initial reports suggest there have been five fatalities and 56 people have been hospitalized.

… as the global importance of hydro is underlined by IRENA