Chile’s second largest power producer, AES Gener, a subsidiary of the US independent power producer AES Corporation, expects to commission the 531 MW Alto Maipo hydropower facility in the second half of 2020, following refinancing of the project and the signing of a new construction contract in May.

Construction of Chile’s largest hydropower project to date, and one of the largest underground hydropower projects in the world with more than 70 km of tunnels and two underground powerhouse caverns, began in 2014, but has experienced cost overruns as a result of more difficult than expected geological conditions.

The financial restructuring has put the project back on a solid financial footing and maintains the financial health of AES Gener and its investment grade, the utility announced on 8 May. The project, which will comprise a cascade of two run-of-river plants, the 264 MW Alfalfal 2 and the 267 MW Las Lajas, on the upper section of the river Maipo, about 50 km southeast of the capital Santiago, will deliver clean power to meet the growing supply needs of Santiago and the metropolitan region for many decades, AES added. “This project is of great importance for the central region of Chile, adding 531 MW of capacity to the grid with zero emissions, 24 hours a day, 7 days a week”, said Ricardo Manuel Falú, General Manager of AES Gener.

The company concluded financial restructuring on 8 May to cover the increased cost of the project, paving the way for the signing of a new construction contract with the civil engineering group Strabag SE of Austria. The project, which was originally budgeted at US$ 2 billion, is now expected to cost US$ 3.05 billion, of which half will be covered by equity contributions from the owner-operator, as well as Strabag and the former minority shareholder Antofagasta Minerals (AMSA). AES Gener has committed up to an additional US$ 400 million, increasing its total equity contribution to US$ 1019 million. Lenders have committed a further US$ 832 million in debt, including incremental funding of US$ 135 million to cover the extra construction costs.

AES Gener, meanwhile, signed a new lump sum, fixed-price contract with Strabag SE on 9 May, with a value of around €1.5 billion (US$ 1.78 billion), which covers both the work that has already been rendered and all future contracted work. The new contract includes guaranteed completion dates, backed by US$ 300 million letters of credit and a corporate guarantee from Strabag SE, AES, said in a presentation of Q1 2018 results. The contract will significantly reduce the risk associated with the project by transferring the geological and construction risks to the contractor and providing strong incentives for early completion, it said. As an incentive, Strabag will receive US$ 392 million through the first 20 years of its commercial operation, as well as incremental shares if certain milestones are met, AES added.

Strabag SpA, the Chilean subsidiary of Strabag SE, has been contracted to complete construction of the southern section of the tunnelling, following the termination in 2017 of the contract awarded to Hochtief and CMC di Ravenna. This will entail the excavation of 18.5 km of tunnels in the Volcán and Yeso valleys to the south, as well as to build the intake structures and a 5 km-long steel pipeline. The additional work is valued at around €800 million (US$ 951 million). Strabag was awarded a US$ 490 million contract in November 2012 to excavate two-thirds of the project’s underground watercourse and powerhouse works in the valleys and mountains of the Colorado and Maipo river basins to the north, totalling some 46 km of tunnels and shafts.

Construction began using drill-and-blast methods for access tunnels into the underground powerhouse caverns and a total of four open gripper type tunnel boring machines (TBMs) for the long tunnels. TBM diameters vary from 3.5 m to 6.9 m, and include TBM manufacturers Herrenknecht of Germany and the Robbins Company of the USA.

AES Gener disclosed in late 2017 that difficult geological conditions had been encountered along some sections of the long and deep tunnels, owing to high in situ stress conditions that required the installation of high capacity tunnel support that impacted the overall progress of the TBMs. TBM progress along some tunnels has been less than 10 m/day, while on others TBM progress has ranged from 10 to 30 m/day. Independent reports prepared for Hochtief-CMC claimed the tunnelling conditions were more difficult than expected, and that the construction approach for the tunnels with the use of open gripper TBMs as specified by the project developer were dangerous, in comparison with the use of shielded TBMs. Following the termination of the contract with Hochtief-CMC, the TBM manufacturers took over the tunnel construction activities.

In February 2017, Strabag SE contracted Pöyry to provide engineering services, covering a review of constructability and preliminary engineering, detailed design and preparation of tender documents for hydromechanical and electrical works, as well as site supervision during installation and commissioning.

Voith is meanwhile responsible for building the powerhouses, as well as the engineering, manufacturing, installation and commissioning of the complete electromechanical equipment supply, including turbines and generators, and the entire project management, under a contract also awarded in November 2012.

The two plants are designed to supply approximately 2320 GWh/year to Chile’s central Sistema Interconectado Central (SIC) power grid, as well as the copper mining operations of mining company Antofagasta Minerals (AMSA). The Chilean copper producer, which previously held a 40 per cent stake in the project development company, Alto Maipo SpA, through its subsidiary Minera los Pelambres (MLP), withdrew from the project as an investor in January 2017 because of concerns about the cost overruns, but said it would remain a major offtaker. Its withdrawal led AES Gener to acquire AMSA’s share, with Strabag SE becoming a minority partner, with a stake of almost seven per cent.

As of May 2018, more than 64 per cent of the construction work has been completed, according to AES Gener. 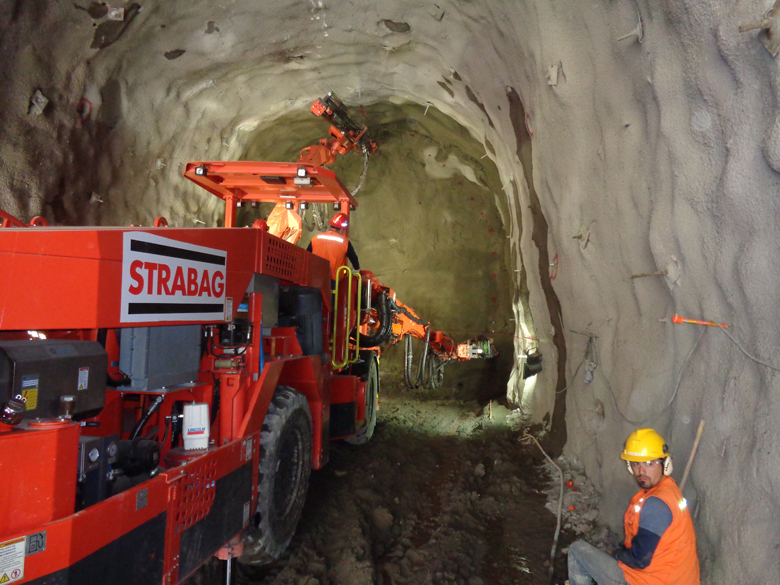 The Lesotho Highlands Development Authority (LHDA) will soon be inviting Expressions of Interest from suitable, qualified engineering and construction companies interested in tendering for the construction of the 165 m-high Polihali dam and the 38 km-long Polihali transfer tunnel.

The Société Hydrotechnique de France will hold its biennial conference in Grenoble, France, in 2019.